Sonos Arc review: raising the bar for the future?

Sonos Arc resets the home theatre experience for Sonos fans, ready for the decade ahead with Dolby Atmos support alongside best in class audio streaming.

When Sonos launched the Playbar in 2013, it was not the first of its kind but it was certainly the most fascinating product I'd seen at the time. A soundbar – a reasonably new idea of the time – that also played music from various streaming media services – something Sonos was still miles ahead on.

A lot has changed in seven years. Wi-Fi standards have upgraded twice[1]. Broadband speeds have improved[2]. And we've moved from HD plasma as the best screen money could buy to 4K OLED smart TVs with most major streaming services built directly into the TV.

Our expectations of home entertainment fidelity have grown. The Sonos Playbar has kept on delivering a great experience, but it's not capable of keeping up with the newest audio standards people want from premium living room entertainment – and the coolest kid in town is now Dolby Atmos.

That's why Playbar and its 3.0 audio setup is saying farewell and Sonos Arc is stepping into the spotlight with a dazzling 5.0.2 speaker array.

Read on for the full review...

Where Playbar was excellent for its era, its $999 price tag has struggled to stay competitive against growing competition. Sonos speakers that are just for audio can almost last a lifetime (which has caused its own dramas for Sonos as it transitions to a new operating system), but when they're under your TV they need to drive exciting home cinema audio – where the fidelity standards have shifted quickly in the past few years.

The new Sonos TV speaker line up is a great split across the affordable and more compact Sonos Beam at $599 or the impressive Sonos Arc at $1399 for a more complete all-in-one experience that can be extended to a truer surround sound and immersive sound arrangement.

Regardless of TV, the Sonos Arc is like every other Sonos speaker. Along with out of the box access to Sonos Radio, it supports Spotify, Apple Music, Deezer, Stitcher, Amazon Music, Audible, Bandcamp, Calm, Google Play Music, iHeartRadio, last.fm, Pandora, Plex, Pocket Casts, SiriusXM, SoundCloud, Spreaker, TIDAL, TuneIn, YouTube Music AND AN AWFUL LOT MORE. It's too easy to overlook just how expansive Sonos audio service support is so I wanted to make that as plain as possible.

I mentioned Arc is going 5.0.2 earlier versus the old Playbar 3.0. For Playbar, we had a six-speaker array with centre drivers and angled drivers firing out at angles for left and right channels. The new Arc has eight-drivers shooting to the centre, those left-right angles plus more direct side firing drivers to really expand the spread. Plus the newest arrival – two drivers shooting up into the top of the room to add verticality to the experience, which is an essential to deliver the Dolby Atmos experience.

Add extra Sonos One speakers for rear channels and a Sonos Sub and it can all sync up nicely to deliver a 7.1.2 channel experience that is hard to top without wiring up your living room like it's a full fledged home cinema. Think about it. Even a renter can get a dream audio experience without drilling a hole. And you can use the Night Mode and Speech Enhancement features to minimise waking the kids (or annoying the neighbours).

Not to be overlooked, the Sonos Trueplay experience also ensures that the speaker will tune its performance to your specific room environment – whether it's all hard floors and walls or carpets and high ceilings – which ensures you immediately get an amazing sound without any fuss at all.

Alexa and Google Assistant are both available on Sonos Arc too, if that's your angle on smart home action. You can ask for volume control and other basic interactions, or have the speaker play music by just asking (that's my favourite), along with all the other features you might expect from the hands-free smart home era. But all it took was one misheard query that meant our movie volume dropped so it could tell us that it didn't understand the request. That was it. It was switched off and I just don't see having these directly on the home theatre speaker system as the ideal. I use this a lot on my Sonos One speaker in my office, but I never want to be interrupted in my living room like that ever again.

Dolby Atmos and our ARC/eARC future

Dolby Atmos is the big reason to get your hands on a Sonos Arc. It's the new standard that adds object-based metadata to the audio signal, straight from the cinema to the home, and it requires far more data throughput than previous digital surround sound signals.

To get the audio from the TV to the Sonos Arc – any audio, not just Atmos – you now go in via HDMI instead of the Optical port on the Playbar. But there is still an Optical port here if your TV just isn't ready for the new standards so you can stick with what you've got until you're ready.

And that's the big story with the Sonos Arc. There's a lot about what you're getting here that most of us aren't ready for but that will absolutely be the big feature on our next new TV.

To utilise the HDMI input you need an HDMI ARC (Audio Return Channel) port on your TV. If there's one of these on your TV, that sends the signal from the TV itself or any other HDMI port out over HDMI to your speaker system. A lot of TVs over the past five years should already have one of these, but some might not.

In my testing setup, a 2015 4K Sony TV does have ARC on HDMI 1. And, having not explored ARC at all before, I spent a lot of time trying to get Dolby Atmos working but it just wasn't to be. There are some sources that can push Atmos over the original ARC standard – it's a question of whether it's designed to deliver Atmos over certain compression standards or not.[3]

The two devices I had available to deliver Atmos were an Apple TV and an Xbox One S, but neither would do the deed over ARC.

For the no-questions-asked delivery, you need an eARC port. And that's now appearing on the latest and greatest TVs. Given a year or two, you can expect this to become more and more of a norm, and the Sonos Arc you enjoy today will be ready to give you more value when you do.

But for me, right now, it meant I could not hear the exciting new features of planes flying over head or other atmospherics that fill the room in new ways. But I might have started researching new screens in order to hear what I'm missing as soon as possible.

When comparing the Sonos Arc to other shiny new dedicated soundbars, one big point of difference that feels like it could turn some buyers off is its single HDMI port. Where HDMI ARC/eARC is the connection of choice we typically find at least one 'passthrough' HDMI port that ensures that ARC port isn't a wasted channel on the screen.

Some have as many as three ports (yes, even with Dolby Atmos) to expand the capacity of a TV as an extra feature. But the one unit with every bell and whistle was at least $1000 more than the Sonos Arc, so if you want it all you have to pay for it.

Is this a fair argument? I put the question to Sonos during my review period and their answer is that the Sonos focus is on simplicity and ease of use, so that 'AV receiver lite' category that other soundbars are fulfilling just isn't where Sonos wants to go.

It is absolutely an important argument to keep in mind when deciding which way you want a new soundbar to go when it comes to HDMI input and passthrough support. Do you want your soundbar to act like a receiver and host extra inputs? Or do you want it to be the clean and simple unit that delivers the sounds and that's that?

It's a very Sonos decision to stick with the simplest solution to the problem and to ensure that if you wall mount you won't be dealing with an array of cables pouring out the back.

In the long run, I really do hope we see a dedicated eARC port on new TVs that isn't also on HDMI 1. But then, I've been dreaming manufacturers would step up to 6x HDMI ports so we could fit more toys in without needing extender boxes… but yes, yes… us nerds don't represent the norm of one or two consoles and a single set-top box of some kind to deliver all those streaming services or Foxtel.

Personally, I'm disappointed. I hate the feeling of having one of my four HDMI ports – and HDMI 1 at that – display some basic art patterns on the screen if I happen to flick to that channel. It feels like a wasted port, even though it's doing a lot of work to deliver the great audio experience I want and one that will be even better when I upgrade to an eARC capable TV. Just that single passthrough HDMI port would have made me completely and utterly in love with the Arc.

But I also know I do already own a six-port HDMI extender, and I do already have those extra Sonos Play:1 rear channels and a Sonos Sub, along with other Sonos speakers around the house. So I know that what I get when I buy Sonos is a lot more than just the home theatre speaker, it's a life filled with music from almost any source, anywhere in the home, anytime I want it.

So there's no other soundbar I'd want in my home.

There's a lot more tech inside this unit than any Sonos speaker ever before, and it has upgraded styling in both black and white that fits with the modern era of their speaker range. Everything about it feels ready for the next era in living room entertainment and even without the Atmos experience the Arc delivers a lot more than the Playbar as a raw audio upgrade.

This is an entirely worthy successor for the Sonos Playbar, and it does raise the bar[4] so that Sonos has a flagship home entertainment soundbar that is primed for the 4K era and beyond.

If you already own a Playbar, don't go rushing out to upgrade until your TV will help you get everything out of its latest features. But if you already have an eARC TV it's an exciting time to step up.

If you've never pursued audio excellence in your living room and you enjoy a lot of audio even when the TV is switched off, this is the new soundbar you're looking for. 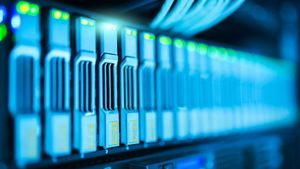