Today's Apple event, launching iPhone 11, Apple Watch Series 5 and a new iPad, really did feel like the beginning of a new era. It's been eight years since Steve Jobs passed, and a couple of months since Jony Ive left the building. But today was the first major event where the dulcet tones of Ive were no longer present to explain to us why a device was worthy of our hard earned.

That connection between the voice of Ive and the mind of Jobs was a long and powerful thing. And there was something about Ive's presence in the design department that made it feel like Steve was somehow still around, especially when the tone of launch events continued to include that warm British voice that was allowed to say the word 'aluminium' inside an American company. He had Permission. He oozed Authority.

These new videos reflect a style that has started to move further into the foreground in Apple's new era of brand identity. Videos that aim to tug at the heartstrings around 'The Power Of Apple Technology' while also having a healthy dose of whimsy.

Here's the official Apple summary of the event, for example:

There's an air of fun. We've had skits at other recent events like when Cook tweeted ahead of the event as if something had gone wrong, a lead in to the intro video of someone racing to deliver him something.

We've had fun videos at WWDC about the hidden life of code compilation that only developers understand.

And we've had energetic '60s cinema vibes proclaiming the joy of a new Apple announcement.

There's a clear sense of fun mixed into the polished delivery under Tim and his team. Here's two more from this year:

A fun take on why privacy matters? It works. No one else is having 'fun' with privacy messaging. And two more from today:

Jobs had a sense of humour, but his focus at a launch was on gravity. That whatever was being announced that day was the pinnacle of technological innovation up to that moment.

Today we saw an event that did miss the gravitas of an Ive introduction. And the new devices are evolutionary in a way that might suggest Ive knew the age of consumer tech revolution has run its course (for now). So it was hard to think what his voice would have added to today's line up of designs.

It does mean the devices must stand a little more on their own. The renowned Reality Distortion Field era is over. It was heavily attached to Jobs but Ive carried that torch a little beyond his direct presence.

What becomes clearer is that Cook adheres to classic Apple secrecy as much as possible but come launch day he likes to show his working. We don't just get "A13 Bionic is the fastest chip in a smartphone ever". We get a detailed breakdown of what it does and why it does it, a kind of surface level proof that this chip is the bees knees. A pitch not just to the casual fans but some extra talking points for those who know they're going to have to justify why an Apple phone is worth the extra bank.

Tim Cook's Apple feels more personal. It remains high-end – sometimes wildly so – but it has a clear sense of how every person, every pocket, every household, is a little bit different. On stage, Cook doesn't try to command the audience. He shares the stage with various Apple product leaders and development partners. It's not all about him, it's about the people who run things telling you why their thing is a cool thing.

Apple is in the midst of a shift toward being a more and more service driven company. Remember that during Cook's time macOS has gone from a product we had to pay for at each upgrade to a platform we get for free. The hardware is a gateway to an Apple software and service ecosystem. Privacy itself is becoming a service offered through Apple software and service options (when compared to its advertising-driven rivals).

All this is to say that, with the voice of Ive now removed from the Apple launch process, the last vestige of the old order is gone. Today we truly see the future of Apple. 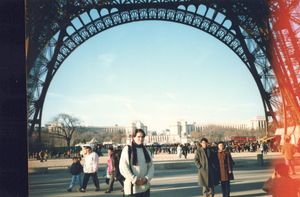