Wild Beyond The Witchlight: Everything we know about the new D&D campaign

All the details from announcements and interviews to share the story hints, races and features we will find in 2021's new D&D campaign book.

The Dungeons & Dragons team is taking us into the Feywild for the first time in the next big campaign adventure, The Wild Beyond The Witchlight, and it looks set to be an adventure filled with whimsy and creepy weirdness as we head to a mysterious carnival and end up lost in the land of the fey folk. Sign me up!

Between the initial announcements and now a deeper dive into what's in the book at D&D Live 2021, we've gathered all the key details we expect to find when the book hits stores on October 19, 2021.

The story (no spoilers)

The D&D team is always careful not to give the game away too early, but we have plenty of insights into the kind of experience we'll have when we leave behind the Material Plane and head into the Feywild on an adventure for character levels 1-8.

"I wanted to go somewhere that I had never been before. In past adventures we have gone to familiar places like Waterdeep and Icewind Dale, and I had never had the chance to write an adventure in the feywild before,"  Chris Perkins told D&D Live 2021.

Our intrepid heroes will visit the Witchlight Carnival which will then lead them into the Feywild itself. The Feywild is a reflection of the Material Plane, but a more vibrant, colourful, and more emotionally charged realm.

We're told we will be dealing with troubles in the Domain of Prismeer, a section of the Feywild known as a 'Domain of Delight'. But things aren't all that well there right now, the archfey who rules this domain is missing, and the domain has been fractured into broken sub-realms – Hither, Thither, and Yon.

This feels like one of the most family friendly campaigns we have seen in a long while, after the survival horror of the Frostmaiden in Iceland Dale and the Mad Max energy of our Descent into Avernus. A playful, twisted fairytale adventure – but that doesn't mean there's no darkness here (Hello? Have you read a proper fairytale lately?)

"This adventure is kind of like a reflection of Curse of Strand," says Perkins. "He is a creature trapped in the boundaries of a Domain of Dread. Well the feywild has the Domains of Delight, but instead of dark lords who control it these domains have archfey who control it and your emotions are so powerful you can shape the domain to your desire. But even the smallest creatures you find there can do this too."

Design lead Chris Perkins talks of "whimsical adventures with a playful wickedness" in the Feywild, with getting lost a very real threat as trick roads can double back on themselves if you don't know the secret to passing by.

Inspirations mentioned include Willy Wonka and James and the Giant Peach. Dahl at his most pleasant with those hints (or overt threats) of darkness.

Whatever emotions your characters plan to bring to their journey, the land itself will respond. Perkins suggests that if you stop and eat a delicious sandwich a flower could bloom at your feet and smile up at you in response to the joy you're feeling.

Again, we don't know any specifics on the story, just that the Domain of Prismeer's archfey is missing and the land is warped in some way. Clearly, we need to help fix it.

But an interesting pointer from Perkins is also that while the Feywild has a familiar high fantasy feel the natives have very different rules and codes to the way people operate back home.

"One of the great things about going into the feywild is you get to meet lots of whimsical creatures and their whole outlook is different to what you expect on the Prime Material plane. The secret to a feywild campaign is that this is not the world you came from," says Perkins.

One thing that was mentioned is certain 'rules' of the Feywild, particularly around pacts, curses, and ownership, and what it means to take something from someone. And a very clear sense of reciprocity, expectations that one kindness must be repaid with another.

A very interesting point Perkins made at D&D Live 2021 is that there will be a way for a party to play through the entire campaign without ever needing to resort to combat – a first for a D&D campaign (at least, as written... no doubt some tables may have found their way to this path with a willing DM).

Along with the friendlier vibes comes some of the prettiest, nicest, most "oh my god can I please have one of those as a pet" experiences too. Art we've seen so far shows off giant corvids with antlers, giant cats with butterfly wings, and so much more.

Two new races will also be found in the book – we'll get a race option for playing fairies for the first time, as well as a new Harengon race which is a humanoid rabbit race from the Feywild.

The team has also announced the tie-in dice set and dice tray for the campaign, which will launch a few weeks ahead of the book release. It's an orange and purple design that is as flamboyant as it should be, with a map of the Witchlight Carnival and card with various info on the Feywild too.

Beadle & Grimm's special edition versions of the campaign are also now available for pre-order, this year with both Silver and Platinum Editions available from the very start. These sets enhance the table experience with things like battle maps, handouts, artifacts (like a unicorn horn), a DM screen tailored to the campaign, and figurines of key characters and monsters.

The Wild Beyond The Witchlight will be in stores on October 19. The dice set will be available from September 21. 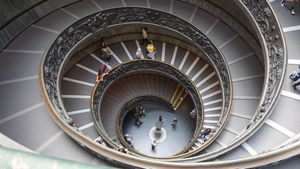 
Get on the games: we chat with Mashd N Kutcher about their gaming-themed new track 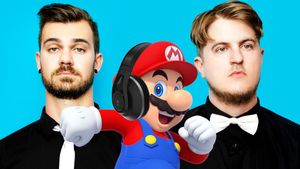