Inside the new Overwatch League Power Rankings by IBM Watson

We chat with the IBM Watson Overwatch League team leader about how they're using AI to level up stats analysis in professional esports.

As part of this year's Overwatch League season, a new partnership with IBM Watson emerged that seemed a little different to your typical brand mention. A new Power Rankings system was being offered up, aiming to go deeper than a traditional stats analysis or gut feeling to decide which players are the best in the competition.

Throwing artificial intelligence at a lot of raw data is always an interesting idea, and while traditional sports are well known for going stats crazy to decide which players are MVP material it has often only happened at a surface level within esports so far. So how does Watson go further than looking at some KDA and accuracy details? Can it capture whether a player is delivering clutch plays when it counts?

We hit up Corey Shelton, IBM Digital Strategist and leader of IBM's Overwatch League team, with a bunch of our questions to get a better understanding of how it all works.

Is this raw machine learning to build power rankings from scratch? Or guided by expert analysts from the game?

We pulled a team of experts from across the world, including data scientists, AI specialists, and software developers, to work together through IBM’s Area 631 program. Area 631 is an internal IBM incubator program that gives 6 experts 3 months to deliver 1 solution, hence the name 631.

But it wasn’t just IBM: the IBM team worked closely with the Overwatch League throughout the process, given their expertise in the game, and altogether we developed the solution in only two months.

The IBM technology, including the machine learning and AutoAI capabilities of IBM Watson Studio and the IBM Cloud, already existed. It’s the same technology we apply to clients in various industries, like healthcare, financial services and transportation, to solve their business problems. Working with the Overwatch League team, we wanted to apply our IBM expertise to the world of Overwatch in new ways.

Any interesting surprises in analysing what really matters in winning a match on a statistical basis?

In a videogame like Overwatch, we had access to an enormous amount of data. From this giant sample size, we identified over 360 different statistics measured in every match across heroes, maps and roles, and about 30 ended up contributing the most to determining wins and losses.

An interesting thing we found when making the initial power rankings based on 2020 data, damage players were not heavily represented in the top 10 and the reigning Overwatch MVP is 10th in our rankings. Something that might surprise fans is that the model is showing that there’s far more to winning an Overwatch match than just dealing the most damage.

Is it purely stats based or does it include things like player reaction times or other data points that indicate “heat of the moment” decision making that can turn the tide?

Some of these “heat of the moment” decisions can certainly factor into the 360 different statistics measured in every match. These data points quantify everything from damage dealt to ultimate generation rate, and it measures how players perform during all facets of the match. Here’s a breakdown of how we use data to make a comprehensive analysis:

How will we see the rankings used during broadcast and will they be accessible online with live updates or other interesting visualisations?

Throughout the season, the shoutcasters will have this data on hand, ready to talk about and use our insights to make predictions in real time during the matches.

Alongside the in-stream visualisations, we’ll be publishing the Power Rankings with Watson updated weekly on overwatchleague.com and ibm.com/overwatch, so be sure to check out all our channels for updated information.


Type by imagining your handwriting


Stern Pinball shows us The Way to a Mandalorian pinball machine 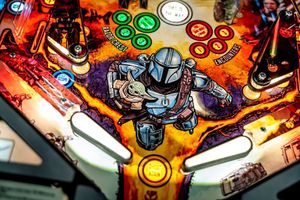