The impacts of the digital world upon every day culture have never been greater. It's time to treat them that way.

There’s soooo much happening right now that shows the blurring of the lines between what happens online and what happens in the real world.

For a long time, people who didn’t spend much time online would somehow look at it as this ‘other’ space, and many parents still think of gaming online with friends as something different to hanging out with friends in the real world. But for those kids, it’s just as real, and in some ways more so as they spend time challenging each other and cooperating on grand quests. Something kids haven’t done all that often in the real world since cricket stumps were used as pretend guns while running around the garden.

But it’s darker adult issues that are coming to the fore. QAnon is emerging from the weirdest parts of 4chan and Reddit to become a part of politics, and not just in America where the bizarre conspiracies argues that Trump is a saviour against the tyrannical Democrats who enslave and eat children (seriously, that’s the origins). Now it’s taking over ‘wellness’ groups even here in Australia, and the coronavirus has been tied into the web of lies until the idea of wearing masks and the anti-vaxx crazies are blending it all together into a unified mega-matrix of madness.

Facebook continues to outdo itself, with ‘armed militia’ groups being reported for inciting violence but Facebook saying it doesn’t breach terms of service… until the Kenosha shooter who emerged from such a group went out and shot a bunch of protesters dead.

Then in more mundane respects we have stories about Slack ‘causing’ high-school type problems in workplaces (see below) as people are ruder to each other through such tools. But maybe, just maybe, this is how a group in a workplace has acted toward each other in the untrackable real world kitchens and corridors, and now Slack is making it easier to hold people to account for bullying and other bad behaviours?

The biggest issue with the sense of accountability out there is automation and scale. The big platforms don’t want to have to manually police billions of posts per day because it would break the laws of physics to try to point enough eyeballs at the act of doing so. But this problem means the platforms allow the sharing of horrific things by erring on the side of ‘let them share’. It’s still messy parts of humanity doing the sharing and letting the feedback loops of conspiracy and poor judgment spill from online back into the real world.

There’s a strong argument that the state of these things might be somewhere very different if a reality TV star hadn’t been given the most powerful political office in the world. But there’s also a clear line from those dark corners of the web to how he got that job in the first place.

Digital and online are one big mess today, and they have been part of the one big mess for decades. We all need to stop pretending it’s some ‘other’ if we are to deal with making modern society a safer and more positive place for the long future we’re all hoping humanity gets to have.

Tasha’s Cauldron of Everything brings a massive set of character customisation updates to the game, in the process breaking the traditional racial statistics system open – helping move forward from ‘fixed’ characteristics toward something better for storytelling around the table.

High Resolution podcast: I speak to Mike Finnigan, the Lead Encounter Designer on The Elder Scrolls Online, about the latest dungeon release.

Byteside podcast: Apple and the company that makes the Unreal Engine and Fortnite (yes, Epic) at war, plus DC Fundome and the future of digital events!

The great Slacklash is coming

Scots is an official language of Scotland. An administrator of the Scots Wikipedia page is an American who doesn’t speak Scots but simply tries to write in a Scottish accent.

A ‘clever’ features of the Chrome browser is now getting out of control and putting the entire architecture of the web at risk of being overloaded.

Facebook chose not to act on militia complaints before Kenosha shooting

At least two users flagged a militia event to Facebook before Tuesday night’s shooting in Kenosha, but the platform ruled that the event did not violate platform rules.

Facebook says advertisers can expect weaker ad performance from iPhone users once iOS 14 comes out next month. Anytime I see an advertising company say that new privacy controls are bad for advertisers I can’t help but think that’s a good thing.

Epic versus Apple? I’m rooting for the users

Two tech behemoths are battling it out, but the most important party in this case is the user. (Teehee… he said rooting…)

Here’s why Unreal has become such a pivotal part of Epic’s business, and what’s at risk if Apple is successful in pulling iOS and macOS support for the platform.

A fascinating look at how YouTube let automated removals err on the side of ‘remove’ during the pandemic, while this story also flags that the opposite has happened at Facebook.

Opensignal has analyzed the real-world 5G experience of our users across mobile operators in a number of countries globally, including Australia, the U.S. and South Korea.

If you never get around to clicking the arrow to update your Chrome, it’s a very good version to do it on. Things will get faster and there’s new tab groups and PDF editing options. Cool stuff.

And here’s the official Google announcement.

My favourite game gets a new expansion in 60 days. This time we get to go to the lands of the dead. Nice sync up with Halloween given the deathy vibes!


The value of uninformed consent 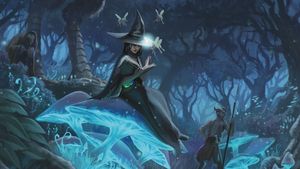