Transparency is a vulnerability

Today I pulled the trigger on expanding the Byteside team, creating an opportunity to bring two paid writers on board to work with me across the site, the newsletter, the social presence, and the podcasts.

I love working in a team. I’ve got a good track record of helping others find a path to doing great editorial work. “Finding your voice” is one of the hardest things to do because you have to let yourself be more yourself in front of people. You’re not using words you think you’re meant to use. You’re saying what you really want to say.

That also meant I had to be as real and transparent as possible with the announcement post, because I want Byteside to be built on positive values from start to finish. And being transparent means you feel like you’re open to deeper attack than otherwise.

So far, people have been very kind about it all.

It’s hard in this moment for everyone to stay firmly connected to their team environments. Early on I think a lot of workplaces were doing well to ensure people stayed connected. But it did add mental load to the daily routine to force those extra moments of ‘team bonding’ or virtual meetings that weren’t 100% official business discussions.

The combo of issues seems to be a weird mix of feeling disconnected from colleagues while simultaneously feeling like work is inescapable. The lack of a commute is reducing that opportunity for enforced mindless downtime. So we’re always switched on in the current environment.

Having friends, maybe even having colleagues, that we can be open and honest with about how we’re going is so important right now. It’s that transparency thing again. Being open is a vulnerability, but we need to be able to trust some people to do that.

Look for those people. Treasure them. And speak to them often.

Byteside is hiring: come work with us!

Big new initiative kicks off today with the announcement of two contract roles to bring new writers into the Byteside project. Exciting times.

COVIDSafe: Did tech or marketing fail?

Byteside podcast: Seamus and Nic discuss the mystery of what’s gone wrong with COVIDSafe, plus WWDITS, SBS OnDemand, and the BOM app is now excellent!

High Resolution podcast: This week Seamus speaks to the team behind Fall Guys, the hotly anticipated ‘Battle Royale’ that is more Japanese game show than Fortnite.

This is wild. Deepfakery used to create a fake writer, Oliver Taylor, who attacked people in a disinformation effort at legitimate news outlets. Now people are trying to work out who was behind it.

It’s another rare, killer app for the iPhone’s TrueDepth sensor array. An app now lets you capture 3D facial data directly into Unreal Engine for use in games or other rendered modelling needs.

After a wave of account takeovers earlier today, screenshots of an internal Twitter user administration tool are being shared in the hacking underground.

I really struggle to buy into early hype like this, but I’m sure some people will find this interesting to think about. 6G in 2028? 4G rolled out in Australia in 2011/2012, so I guess the timelines aren’t entirely crazy. But will the benefits be a greatly diminished return compared with 5G? Do not hold your breath.

Grant Imahara made me a better Maker

Awful news. The sudden death of Grant Imahara on Monday hit many in the nerd world hard. The former MythBusters host inspired so many to explore STEM and Maker realms like never before.

Apple Silicon: The Passing of Wintel

An interesting look at what Apple’s transition to its own processing technology could mean for the wider Windows-Intel history and a future where ARM-based processors could become more and more prominent.

Speaking of which… Nvidia passed Intel as America’s most valuable chip company.

“The threat here is not simply user privacy and data security, though those threats are real and substantial. It is about the striking potential of Twitter to incite real-world chaos through impersonation and fraud.”

How to make better looking and sounding Skype and Zoom calls

This is a serious industry pro offering lots of really useful tips. Making video calls from home is not going away. Even if we do it less we’ll be doing it a lot more than we used to, so taking on board real, useful tips to get better results and look more professional (without buying crazy extras) is always helpful.

Hearthstone goes back to school with Scholomance Academy expansion

I love the Hearthstone, so it’s been great to see a fresh new expansion getting ready to drop next month. The flavour of this xpac looks super fun.

A quick story about the latest mega-priced OG Super Mario game and why it earned such a big auction price. It’s all about how rare your specimen is…


Byteside is evolving: come work with us! 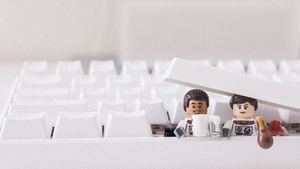