Who's at fault? The Tesla driver? The Tesla autopilot? The Promobot that was weirdly standing on the street like it'd been out late drinking? Is somebody

Who's at fault? The Tesla driver? The Tesla autopilot? The Promobot that was weirdly standing on the street like it'd been out late drinking? Is somebody lying? Thankfully, we have footage of this most futuristic of tragedies.

A lonely robot stands at the edge of a Las Vegas road. Suddenly, it is sideswiped by a passing car. The robot flops to the ground, slower than you might expect for a robot that was just involved in a hit-and-run.

The footage was uploaded by Promobot, the maker of the robot. While the Russian company was in attendance at CES to show off its meet-and-greet autonomous robotic assistants, it's most likely this footage has given the company more attention than its booth on the show floor. (And kinda weird they had a camera in the right place at the right time...)

"At 7 pm the Promobot’s engineers transported robots to the Vegas’s Congress Hall to prepare their booth at the CES-2019. All the robots were moving in a line. But one of them missed its way and drove to the roadway of the street parking lot. At that moment it was hit by a self driving Tesla car." - Promobot statement

So many questions. One is that yes, apparently the Tesla driver did come back to see what happened after parking further down the road. It's claimed the Tesla was in 'self-driving mode' but some dispute it can even be engaged in that mode in this kind of environment (no lane markings).

Apparently the robot was unrecoverable, having suffered 'serious damage' to its body, arm mechanisms, movement platform and head. Clearly this robot needs to wear some protection when travelling outdoors!

But there's no mistaking that a self-driving car vs an autonomous semi-humanoid robot accident is one of the most CES incidents you could possibly encounter.


The Scrapyard podcast: 2019 will be a very important year for Blizzard! 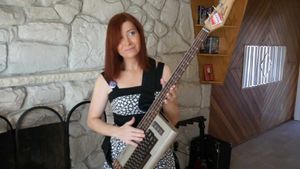