How World of Warcraft keeps evolving its epic storytelling: Part One

Game storytelling doesn't get much more epic than the Warcraft universe. Next year the franchise turns 25 years old, and in two weeks World of Warcraft goes

Game storytelling doesn't get much more epic than the Warcraft universe. Next year the franchise turns 25 years old, and in two weeks World of Warcraft goes live with its seventh expansion, Battle For Azeroth.

Throughout that time, stories have been told of a fantasy world's great conflicts. Humans versus orcs versus demons versus undead... light versus shadow, nature versus death...

Epic struggles, each with grand heroes and vicious villains that push players into the spotlight as these wars are raged for the safety of the virtual lands these players care so much about.

And after all these years, players care a lot. But that's thanks to both how well the Blizzard team has told its stories since the early days, and how they have evolved their stories to keep up with the changing tastes and technologies of the time.

Back when World of Warcraft launched, there was no Facebook. No YouTube. No smartphones. In many ways, as the first MMORPG to have millions of players, WoW was a social network, but that network demanded an environment that was exciting to explore and fun to spend time in with friends.

With the impending launch of Battle For Azeroth, I spoke to Alex Afrasiabi about the evolution of the game's storytelling since its launch. Afrasiabi started out as a Quest Designer before the game's original launch, and has since risen the ranks to become the Creative Director of World of Warcraft.

Part One of our interview focuses on Alex giving us a walk through the history of the tools quest designers use to tell stories in the game.

Part Two looks at how the story team has matured its storytelling to weave ever more epic tales into the game – and how those stories serve the gameplay experience.

Finally, Part Three explores the future of stories in the Warcraft universe and the promises Alex offers to players around the experience of stories within the game.

SB: Tell us about just how far the actual game tools have changed for the storytelling team since you first launched? And how the game development tools help, or hinder, the stories you tell in the game?

Alex Afrasiabi: I came in with basically eight months to ship, so when we first started putting quests in we were in pretty deep crunch at that point.

Making quests and putting them in the game was a very different thing than today. There weren't these grand overarching narratives. It was just four or five of us that were all newbies to this and it wasn't even the common thing in the genre.

If you think back to games like Everquest, ironically, there weren't a lot of quests. There wasn't a lot of direction or guided game play.

So that was our main directive - to guide the players through the areas, get them to go to the different parts of the map, around the zones, see all the wonders there are to see and while you're doing that tell a story. Do something cool.

Back then the role of quest designer was very much limited. In our tools it was pretty much just the quest text and applying things like "Hey, I've got to kill eight bears."

The bears were already spawned [placed into the game world] for us. The quest designer didn't do spawning back then. We'd go to Silverpine Forest and there's just a bear behind every tree.

The quest designer would go in and go "I'm going to make a quest to deal with those bears." And they'd assign the bears to the quest and that's how the quest would be formed.

The big change from that - and this happened rapidly in those final months of development - was the workflow changed.

It changed because we, as the quest designers, really saw how inefficient it was for us to not be able to do things like spawning. So spawning in the outdoor world, and using the powers of those design tools, became part of the process for quest design.

When we could do that, the stories we could tell became a lot more cohesive and coherent. Because, we're now not dealing with a world that's already spawned to someone else's specifications.

It looked fine, but we didn't necessarily want bears there, right?

We now had the ability to do that and change it without having to worry about what that would mean.

So really, from Classic to Burning Crusade that was one of the bigger changes.

And that actually opened the floodgates for us to tell way more concise and directed stories, because we actually now controlled what the world looked like.

Everything else after that is an evolution of fidelity.

We've honed that skill and we've gotten more powerful tools and the ability to do things that we never dreamt of doing.

There's big milestone moments too. Look back at Wrath of the Lich King [WoW's second expansion].

That was when a young Alex has a crazy idea and a crazy pitch of "Hey, we should start putting movies in our games, we've got a team that does machinima outside the game, but can we incorporate that into the game?" And they somehow say yes, and thus the Wrathgate was born.

Then there's bigger features like vehicles and phasing and all these other tools that have come along, in later years, that again our team has really adapted to, and inserted and incorporated into everything. 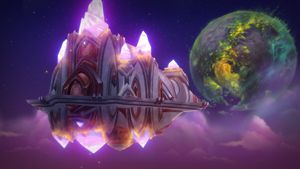