As the dust settles on the 2018 FIFA World Cup, a survey of football fans has delivered an interesting verdict on the tournament's introduction of a Video

As the dust settles on the 2018 FIFA World Cup, a survey of football fans has delivered an interesting verdict on the tournament's introduction of a Video Assistant Referee (VAR) system.

Data collection agency, VIGA, queried a panel of 1,000 football fans from across England on their reaction to the VAR and whether it has a wider future in football.

Impressively, an overwhelming 75 percent of those surveyed believed the VAR felt the overall quality of the games, and the same percentage felt refereeing was also improved thanks to the use of this technology.

And while many vocal fans were worried that VAR would slow football down too much, 81 percent of those surveyed felt it was worth slowing down play in the name of ensuring correct decisions were made.

While these are positive numbers, when asked about how fair the decisions being made were, four in ten agreed that there had been some unfairness. Particularly in times when VAR should have been used, but wasn't.

Respondents felt most strongly about the use of VAR in penalty decisions and straight red cards, and when it came to the ways VAR is currently not used there was strongest support for use in off the ball incidents.

Only 45 percent felt it would be good to use VAR for offside rulings.

When it comes to the ultimate decision - should VAR be used more widely than the World Cup, there were few who said no.

Only a very thin 2 percent of those surveyed were against seeing VAR rolled out to the domestic Premier League football competition.

The introduction of technology to traditional sports has often been controversial.

I've shared my thoughts here already about giving teams more say in the use of VAR, based on referral systems in sports like the NFL and cricket.

And fans surveyed by VIGA also suggested more autonomy for the VAR officials could be a good thing - let them make decisions when they see a problem, not just require the referee on the field to request their involvement.

This 'eye in the sky' concept could be the ideal should they find the right set of rules to focus their attention around.

Everyone wants sport to find the right balance between technology improving decisions and keeping the action flowing freely on field. As one of the early steps, VAR seems to have cleared the first hurdle with fans at helping keep that balance just right.


How World of Warcraft keeps evolving its epic storytelling: Part One 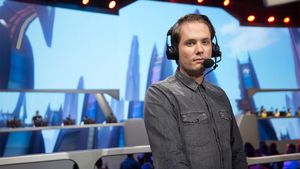