Games industry finally catches a (tax) break: Digital Economy Minister Jane Hume has announced that the upcoming federal budget will include a tax offset for videogame development in Australia for the first time. The support will take the form of a 30% refundable offset, in line with the wider screen industry offset for film and television production. The games industry has long asked for equal positioning with the wider screen industries, and with this announcement industry body IGEA has recognised the offset makes it one of the most attractive in the world and will encourage greater investment in the local industry. A very good day for the Australian videogames sector.

An AI with dementia: A partnership between Dementia Australia and Deakin University has today led to the launch of an AI bot that presents itself as having dementia. The new AI bot, named Ted, was created as a tool to train carers to better manage interactions with individuals who have dementia in a more comfortable environment, with full speech-to-text interaction and a motion captured performance for Ted that makes the interactions feel as much like a real world situation as possible.

Trump ban stands: Overseas, the Facebook Oversight Board, an independent body created by Facebook to try to take some of the heat off its more controversial moderation decisions, has upheld the suspension of former President Trump from the social network. But the Board also took the time to demand Facebook make a real decision about his future on the platform, arguing the company’s indefinite ban does not sit within its own rules and it must either put a time limit on the ban or declare it permanent. A decision that suggests the board does not want to be a scapegoat for Facebook making firm decisions in its own right.

Starship success: SpaceX has this morning achieved its first successful landing of its Starship prototype, SN15. After a series of explosive failures, SN15 launched and flew ten kilometres into the sky before a freefall back to Earth followed by a manoeuvre to flip the vehicle and gently touchdown in an upright position. The Starship design aims to be a fully reusable rocket that can carry 100 tons of cargo and passengers to the Moon and Mars.

Goodbye Calibri: Microsoft is currently in the process of deciding on a new default font for Microsoft Word, PowerPoint and Excel, offering up five new typefaces to the world while it considers which will be the new default. Since 2007 the default has been Calibri, arriving in the time of Windows Vista. Calibri’s designer, Lucas de Groot, told Wired he feels it is a relief to see Microsoft move on. All five of the new font options are available to anyone using Microsoft products connected to its cloud service.

Make games Nintendo style: In video games, Nintendo has announced an exciting new game making tool for Nintendo Switch called Game Builder Garage. The software aims to give easy, accessible game programming education and experience to anyone who wants it, and make these games shareable too. Guided lessons eventually lead to a free programming mode and then you can share your creations online or download games made by others. I’m getting Scratch programming vibes with the flair of Nintendo. It looks amazing and it goes on sale June 11 for $49.95.

Pentanet indigenous jerseys: And, finally, in esports, in the lead up to the League of Legends Mid-Season Invitational tournament in Iceland, Australia’s Pentanet.gg has revealed an indigenous designed jersey for the team’s MSI run. Designed by Wardandi Noongar artist Tyrown Waigana, the jersey features depictions of five birds found in Western Australia where the team is based. The team’s group stage matches kick off overnight tonight, with matches at 1am and 2am Sydney time followed by a third match at 11pm Friday night.

Japan's new Pokemon manhole covers are the very best, like no cover ever was

This is such a gorgeous idea.

“Jimmy Donaldson, 22, is out to become the Elon Musk of online creators.” This is an interesting piece that looks at the good and the bad of the YouTube megastar.

A giant piece of space junk is hurtling towards Earth. Here's how worried you should be

China’s Long March 5B rocket, after a successful blast-off in April to deliver a space station module, is now on track to crash-land somewhere with a latitude between New York and New Zealand.

Dementia Australia and Deakin University have launched an AI bot with dementia to help train carers to better help humans with the disease.

Bugatti's $300,000 pool table has gyroscopic self-leveling for your yacht

If you can’t afford a Bugatti car, here’s a ridiculously cool pool table it’s making instead.

1998: Steve Jobs announced the iMac, beginning the new era of iProducts at the company and his restoration as the leader of Apple. (He was still called the ‘Interim CEO’ at the time.)

Which country had a major corruption scandal revealed because backdated documents used the Calibri font which was not available on the date the documents were changed to? 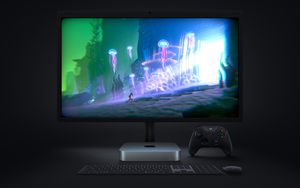 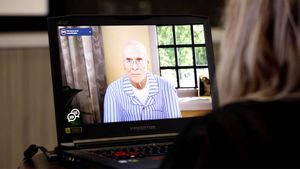