Who would've thought playing with sawblades would be so much fun? Disc Room proves a fast, tight and deadly challenge.

Failure in games elicits many different emotions, from surprise, frustration, through to recognition that you simply got your arse handed to you. In Disc Room, failure comes fast and frequently — and it's a bloody good time.

As with many Digital Devolver-published games, Disc Room features a totally absurd premise: set in 2089, you play as a scientist exploring a giant disc orbiting Jupiter. Also, this disc just happens to be populated with countless spinning sawblades of death, a standard obstacle for any scientist working in the field.

Played from a top-down perspective, you navigate sawblade-infested rooms featuring different challenges to overcome. Some only let you progress if you survive for 10 seconds or more, while others require you to defeat giant serrated guardians. Every room has one constant: you touch a disc, you die.

Getting sliced and diced is rarely a disappointment in Disc Room, mainly due to how quickly you jump back into the action, but that's not the only factor at play. Disc Room goes as far as occasionally encouraging you to fail in order to become stronger.

Check out Seamus' interview with the Disc Room developers from the High Resolution podcast.

There are so many deadly disc variants, but the most intriguing are the ones that empower you with new abilities, under the caveat that you let them saw you in half first. Early abilities include a dodge roll that lets you leap over discs, plus another power-up that temporarily slows time. To tell you more of the abilities would spoil the quirky discoveries Disc Room offers.

I love a good dodge roll, and let me tell you, Disc Room's dodge roll is tight, as are the controls — meaning every screw-up is entirely on you. These precise controls also help other abilities, such as the slow-mo, make substantial differences to the gameplay.

Wary of making you too overpowered or introducing too much complexity, you can only equip one ability at a time. I played Disc Room using an Xbox controller and solely used the control stick plus the 'A' button, as the game smartly channels all your focus into the utterly crazy rooms filled with sharp objects.

Even though Disc Room is a gruesome-sounding game about getting chopped into puree repeatedly, its goofy comic book presentation helps tone down the violence for those of us with weaker constitutions. You can even change the blood to confetti!

Another area Disc Room flexes its saw-toothed muscles in is accessibility, including a bunch of settings that let you choose how you want to be challenged, most notably including the speed at which the discs move.

I also really appreciated how easy it was to hop in and out of Disc Room; zipping between levels was a breeze, and there was always a different room to try if one became a struggle.

Fast, tight and deadly, Disc Room is an equally challenging and rewarding game that encourages experimentation. Few games actively reward you for failure — Disc Room does so in a way that has you welcoming the sweet embrace of a sawblade to the face. 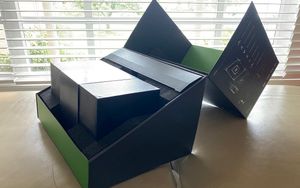