Facebook can be a place for good. It has those pockets all over its swampy landscape. Demanding it be better is more important when it’s urgent it gets on with the job of fixing runaway racism, conspiracies, and anti-scientific bloviation.

So let’s dig a little deeper on the whole Facebook quitting thing. I’ve been angry for a long time, and I became especially angry on reading the news that Facebook was yet again abdicating responsibility with regard to factchecking climate denial.

Every ounce of lip service has a consistent lack of action.

It’s funny that right alongside the timing of my “I’ve had enough” came a wave of analysis and organised attack on Facebook, targeting it in the only place it cares about: it’s revenue column. Not that the boycott would hurt all that much, but the targeting was effective.

Zuckerberg admitted it was more of a perception problem than a financial one, but if it didn’t resolve to fix that perception then some important advertisers might take their dollars away for good. And if the only ads on Facebook became the low-rent drop shipping random stores the novelty might eventually wear thin with users.

Anyway, with all that in play I really did have multiple occasions where I realised work-related announcements were made that I needed to follow up on for my job. And I realised that each time Facebook makes an actual change to what it is doing, or if something big breaks out in that environment, it’s not OK as a reporter on the how digital culture is changing the world to just say “Yeah, can’t do that one, I don’t do Facebook anymore…”

My new intention is to still not ever put it back on my phone – I strongly encourage everyone to delete it (I have Messenger on my phone because family use it a lot). Life is so much nicer when you never just ‘browse’ Facebook.

I’m also not going to keep flogging this on the newsletter. This isn’t the Anti-Facebook Roadshow.

But I will very actively watch what is happening and I’ll follow how real its latest promises of action are. Below there’s a few stories about the independent audit into civil rights it commissioned on itself. It’s damning stuff and the coverage is well worth a read, as is the introduction to the report itself (PDF).

It slams Facebook for its inaction on political speech, pointing to the two-tier system where a politician doesn’t have to follow the same rules and thus has a system of power that becomes entrenched by this choice, and it can be abused to suppress voting in November.

Facebook can be a place for good. It has those pockets all over its swampy landscape. Demanding it be better is more important when it’s urgent it gets on with the job of fixing runaway racism, conspiracies, and anti-scientific bloviation. There’s a lot at stake.

It’s a fight I’d rather be in than one where I stand on the sidelines.

Audit slams Facebook as a home for misinformation and hate

Wired’s coverage does a good job catching up on what’s happened in recently days. And if you missed it above, here’s the full civil rights audit (PDF).

Byteside podcast: Seamus quickly admits that he can’t quit Facebook and Nic can’t get money back from Wish. But at least there’s flying cars coming to outback NSW!

“The advertising boycott will continue until Facebook gets serious about racial justice and takes strong measures to stop the spread of hate and disinformation.”

Nic and I love to laugh about Quibi and there’s the seed of a good idea in there… but the way it’s been launched? The three month trial window just lapsed for early adopters and the stats are miserable.

Ninja starts streaming on YouTube after Microsoft shuts down Mixer

Everyone wondered where he would go. But this seems like he’s just having some fun and, sensibly, perhaps testing out what things would look like if he didn’t go straight back to his OG comfort zone.

Jim Steyer: the man who took on Mark Zuckerberg

Steyer helped make the Stop Hate For Profit boycott happen. This piece looks at what he thinks about the things that could be done for Facebook to be better. He’s not being some crazy radical. It’s all quite sensible if only people were put first…

They include a new “together mode” that puts all participants in a single virtual environment. I’m really not sure about this. Give it a few sessions and does this feel like more than a gimmick? On the other hand, squeezing in as many faces as possible does help, so breaking the box could be a big win.

There’s a lot more in the latest Microsoft Teams update too that gives it a lot more power.

Former Evernote CEO Phil Libin is launched a very clever videoconferencing tool at just the right moment. With support for Zoom, Google, YouTube and more, it lets you get a bunch of slides ready for presentation while you talk, including that classic newsreader style with the inset info box. What a timely idea!

I’m so out of the loop on the latest discussions around this stuff that I hadn’t realised there’s a USB 4 standard on the way. Thunderbolt 4 will handle that and more. And, importantly, Apple has stated that it intends to maintain Thunderbolt support in future Macs based on its new processors.

The one issue that is starting to emerge with the universal USB-C port is that we lose track of which ports support what standards. If every plug fits every hole but not every hole supports every standard, things do get messy.

He launched his website… last year? Who knows what time is anymore. But here we now get some BRAND NEW FAR SIDE!!!

There’s three at time of writing. 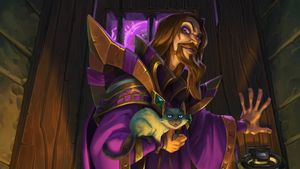 
Hearthstone goes back to school with Scholomance Academy expansion 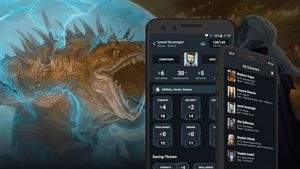