The next big expansion for Hearthstone, The Boomsday Project, launches August 7! It's full of science and technology of the weird-fantasy kind. Just the way

The next big expansion for Hearthstone, The Boomsday Project, launches August 7! It's full of science and technology of the weird-fantasy kind. Just the way we like it.

So we were given some quality time with Dean Ayala and Peter Whalen from the Hearthstone dev team to dig into the most scientific of the expansions new features - Magnetic cards.

If you're new to Hearthstone, it's the biggest digital card game around with tens of millions of players worldwide. It's on PCs, Macs, smartphones and tablets, and it's free to play.

There's plenty to enjoy without ever spending a penny, and you can earn cards and new packs of cards as you play - but if you want to play competitively you'll probably need to spend money on cards.

It's great fun and I've personally been in love with the game since it launched back in 2014.

If you missed the Boomsday Project announcement video, enjoy. You can see the Hearthstone team had a ball playing mad science lab for this one!

Magnets: how do they work?

We asked the Insane Clown Posse question and, thankfully, got a good  answer.

"We really wanted to do something cool with mechs. Something a little different," says Peter Whalen, Senior Game Designer on Hearthstone. "One of the core fantasies of mechs is sticking them together."

"If you've got a bunch of little mechs and one has a cannon arm and another has a force field and another has a laser, and at the end of that you have a giant awesome mech that destroys everything around it. So we wanted to capture that fantasy in Hearthstone and Magnetic is the way we're doing it."

"One of the reasons that Magnetic is really exciting to me is that mechs are really cool," says Dean Ayala, Lead Balance Designer on Hearthstone.

"Going back to Goblins vs Gnomes, which is one of my favourite sets, mechs played a lot differently back then. If you played a lot of mechs and you got a lot of mechs on board, there were text boxes you could use based on 'If you control a mech, do this thing' or 'get this bonus'."

"So even though they are mechs, thematically it's going to play a lot differently compared to older sets and I think that's really cool."

The basic concept in play is simple. You can choose whether you want to Magnetically attach a Magnetic mech onto another mech that's already on the board.

Like a real life dipole magnet, you get two sides to the story. Drop a Magnetic minion to the LEFT of the minion you want it to effect and the two will zap together into a single beefy minion. Play to the right if you just want that second minion to land on the board.

"There's a lot of the UI and effects make it really clear too," says Whelan. "The left side of the mech in play glows as does the right side of this one. There's a cool beam of energy between them, like a magnetic energy connection to the left. When you play to the right that's not there."

"We iterated a lot on the UI, whether to make it a Choose One like the Druid cards, whether you should always play it on a mech when one is in play, so it's always a buff," explains Whelan. "We went through a bunch of different versions and this was the one we ended up liking the best."

"You've seen Spider Bomb, it's a 2/2 mech with Deathrattle 'Destroy an enemy minion'," explains Whalen. "So it's basically Deadly Shot plus a 2/2 and you can play that on its own or if you already have a mech in play you can give that mech +2/+2 and the Deathrattle."

Right now there's just eight Mech tribal cards in the Standard Hearthstone card pool. That isn't a lot to work with. But, of course, we're expecting a LOT of new Mechs to appear as part of The Boomsday Project expansion.

"Give us a month, there's going to be more than eight mechs in Standard," says Whelan.

The ability of the Magnetic keyword to deliver the versatility of both a buff spell or a direct minion can't be overstated. And it's something Ayala is particularly excited about.

"When we wanted to bring back mechs, we wanted to do it in a way we hadn't really done it before. Magnetic really does that, it's not necessarily about having a bunch of mechs on the board, it's about having the versatility and the options."

There's no getting stuck with a spell with nothing to play it on, should the draw not fall your way.

"Imagine if you could just play Blessing of Kings as a 4/4 sometimes," says Whelan. "It's pretty good!"

And Magnetic cards can compound - you can play a second Magnetic card to further boost something you already dropped a magnet on. And a third. And a fourth...

There's no sleep effect applied to a minion in this instance either -- it's pure buff on a card that's free to attack same turn, so every Mech on the board becomes a threat that cannot be ignored.

"It also makes you less vulnerable to area of effect attacks," says Ayala. "There's a lot of times someone combats a minion centric deck with things like Flamestrike or Duskbreaker or Blizzard or something like that."

"So having the knowledge of your opponent and what kinds of cards they're playing will give you an idea of how you want to play mechs."

Want to combat a deck that has great board clearance abilities on lots of small minions? Go big. Want to avoid a single target removal effect you know they're probably holding? Go wide.

This versatility seems to infuse more cards than just those with the Magnetic keyword. Take Omega cards.

"The downside of playing a deck that has a bunch of late game threats - 8, 9, 10 mana cards - is you end up with those cards in your hand and you can't play anything in the early game," says Ayala.

"Omega gives you the option to have something for the earlier stages of the game but you get the versatility to save that up if you're playing against some crazy control deck."

"So you have late game threats and also things that get you up early and it's in how you choose to use those cards that gives the versatility for whatever you need in a given situation.

Just as not all metals are ferrous, not all mech-like cards in the set are Mechs.

So no, that Omega Defender and its wild Turn 10 power play won't be further buffed by some crazy Magnetic minion next turn. At least, not as it currently stands.

When I raise the question of Omega Defender, Whelan suggests they're reviewing the status of the card based on the early feedback from the community.

"We've made some recent changes to make sure our minion types are consistent. Like making Mountain Giant and Molten Giant Elementals," says Whelan. "So it's the kind of thing we take very seriously and so we're looking at what we can do with Omega Defender."

"We had other things in the past like Piloted Shredder where we've called out the mech-iness. There's been others like Gazlowe that are very clearly focused on the person inside the mech suit. We're looking at Omega Defender and seeing what the options are."

While there aren't many mechs in Standard, there's a lot in Wild for people to go crazy with. But even those in Standard should see an uptick in play thanks to what becomes possible with Magnetic minions.

"Unpowered Steambot is a 0/9 mech, so, obviously a lot of the downside of this card is that it doesn't really trade with anything, but it's hard to remove," says Ayala.

"The fact that you can have a 0/9 mech in play and then be able to buff it with Magnetic cards is really interesting. We played with that card a lot in play testing and now that Magnetic exists the kinds of decks you would play that in is totally different."

Or take a Demolisher and add Zilliax, the amazing new legendary mech with Lifesteal, Divine Shield, Taunt and Rush. You're now dealing with a 4/6 mech that deals 2 random damage at the start of each turn. And that two damage also delivers the Lifesteal benefits.

"Having access to Zilliax or Beryllium Nullifier can really meaningfully change the nature of the mechs you have in play," says Whelan.

With the new mechs you see pictured here, one of the three is just an ordinary non-Magnetic mech. But there's a specific point to why they've revealed Upgradeable Framebot at this time - we need good bodies to target with our magnets to get the most out of them.

"It's 1/5, so you have a mech with very good survivability," says Whelan. "You can put Magnetic things on top of them so they survive and you can take advantage of that."

Turning a Zilliax from a 3/2 to a 4/7 makes it a vastly more formidable proposition. So any mech, however mundane, will become a threat to be dealt with quickly in The Boomsday Project.

The focus of Magnetic minions is in Neutral cards plus three specific classes. Hunters, Warriors and Paladins. While we've only had reveals on Hunter's Spider Bomb and Warrior's Beryllium Nullifier, we've also got a hint and what else we could expect.

"Those are the classes that really have that magnetic fantasy," says Whelan. "They're really into different types of engineering. Explosive engineering in Hunter. Giant mech engineering in Warrior."

"And Paladin is doing smaller scale mechs and seeing how little mechs fuse together in cool ways. With giant lasers."

For other classes, their science and technology efforts in The Boomsday Project will be focused on other aspects of the warped science Hearthstone has to offer.

"I just love how it ties into the fantasy of the expansion," says Whelan. "This is really a set that is about science. Whether that's gloop science which some people might call biology. Or lightning science or meteorology or whatever."

To that end, Whelan elaborates on the 'sciences' that each class will be focused around.

Paladins will play with lasers, because the Light can be focused through crystals. Hunters love their explosions. And Warriors love "big stompy things" (the technical phrase, according to Whelan).

Shamans are the meteorologists, with weather-focused science. Druids will have their biology, of course. Priests will be into cloning, and Mages will focus on astronomical ideas.

As for Warlocks? They're delving into ghostly manipulations. Or Ectology, as Whelan dubs it.

We didn't get a specific heads up on Rogues, though. Perhaps something related to cloaking technologies?

If you're wondering about Dr Boom leading the extravaganza when his card is a few years out of date, it's OK, he's coming back as a Warrior Hero card. All we know so far is that he's 'Dr Boom, Mad Genius'.

For another perspective on Magnetic cards, watch the video below.

Stephen Chang, Associate Game Designer from the Hearthstone team, also released a video today that looks into the Magnetic mechanic and these four cards, fusing them all together into an epic 12/20 minion with Divine Shield, Taunt, Lifesteal, Rush AND Can't be targeted by spells or Hero Powers.

It's nuts. But could also be taken out with any single card removal... the risk is up to you. 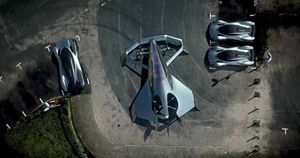