Matt Wyble on how to train smarter to chase Hearthstone glory

Matt Wyble is one of the leaders behind the scenes of Hearthstone esports. A man who has pursued serious sport himself at the highest levels (trialling for

Matt Wyble is one of the leaders behind the scenes of Hearthstone esports. A man who has pursued serious sport himself at the highest levels (trialling for the Olympics in Modern Pentathlon), he's been helping to guide the card game's esports scene since its earliest days.

We had a chat at the Hearthstone World Championships in Amsterdam about his perspective on what sets the elite players apart, how the sport has evolved for those who pursue it, and what anyone chasing the dream should be doing to take their game to the highest level.

Seamus: For Hearthstone, in particular, it comes up quite often that people say, "Oh, my family was a bit skeptical about this digital card game thing I was playing, but then I started to make some money."

I remember with Firebat that was part of his winning speech at the very first world championship. Because it's just a different style of experience and esport, there's a different expectation.

How do you feel like this evolution of Hearthstone as an esport is starting to make people who are getting into it feel like they don't have to somehow prove they're playing something that's important, that there's just more awareness of the fact it's a thing you can pursue?

Matt: If I were a parent of someone that was in this stage, maybe still a teenager, relatively young, it's one thing to say, "Hey, I really want to do this thing. I really want to pursue Hearthstone more professionally. I hope I can win the world championship," versus "I want to do XYZ esport. Here's a contract that I can sign that has a salary associated."

Those are two different things. That's probably always going to be a little bit different, but I think one of the things that the [new Hearthstone championship] system is really about is creating less variability and more stability. That allows players to have more confidence that if they're the best in the world, and if they're putting in the effort and the time in doing all the things that they do to be successful, they're going to be rewarded for it.

Seamus: If someone believes in the value of esport and the power of it, there's just the fundamental work ethic side of what it means to be someone who decides "I'm going to put on the blinkers. I'm going to focus on this thing and get good enough to make that level."

Even if someone doesn't quite get there, that's a hell of a thing for someone to have that experience in deciding I'm going to really try to achieve something to that.

Matt: It's so challenging. I give our players a lot of credit, especially our very best players. They're just hungry to get better at the game every day. Someone like Kolento has been around, like, it's year four for him of playing Hearthstone at a very high level. He's still deeply considering. Still wants to figure it out.

That's enormously time intensive effort and mentally intensive, as well. I think our players, hopefully, are learning a lot of great skills that they can carry to whatever they're doing in the future, whether it's Hearthstone or something else. It takes a lot of effort and intelligence to go far.

Seamus: How close do you feel you are now with the system that's coming in now, the seasons and everything, to where you want 'Hearthstone the esport' to be.

Matt: Every year we make a plan, and every year on January 2nd I'm like, "Oh no! We have to change blah!" I think we get closer every year, which is really all that we're asking for.

We think Hearthstone's going to be around a long time. It's a game we're going to support for a very, very long time, so we have the runway to sort of get it right.

I think we're getting closer. I think, at least in terms of HCT, I think it's more about just making it just better, making every aspect of it improving it, more so than reinventing the wheel.

Seamus: So for those people out there who feel like, okay, I want to start pushing myself. Is there advice? Should they be watching more? Or should they just be flat-out playing more matches?

Matt: The most obvious advice is play more. There's no substitute for playing. I think that's sort of Step One.

Step Two is finding ways that you can be working to constantly get better. There's themes that come up when I talk to our most successful players and ask them this kind of question, selfishly, because I always want to get better, as well, in the end.

Maybe it's going back and re-watching a game, games that you play, and pause, think about it, things like that. Maybe it's trying a lot of different deck types. Maybe it's playing the same matchup repeatedly.

There's different ways that people do that, but one thing that players all say is having a practice group, having a group of people you can play with regularly, bounce ideas off.

A number of players will play the same matchup 50 times in a row just to understand it really deeply.

That, I think is really interesting, because it's not, obviously, Hearthstone's played individually traditionally, but a team-like preparation is such a huge part of it too. 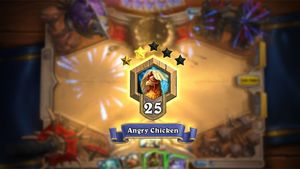 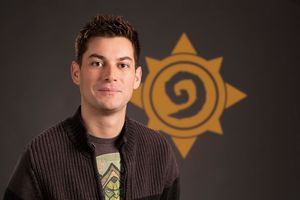