The liberating, serene simplicity of Samurai Punk's Feather is a joy to explore, with pleasant surprises waiting within.

From Australia's own Samurai Punk comes Feather, a peaceful game about flying around a beautiful island as a bird.

In a refreshing change of pace, there aren't many typically gamified elements to be found — no high scores to chase, no timers to beat, and certainly no enemies to fight.

And it's absolutely wonderful because of it.

The act of flying in Feather feels liberating and serene, largely thanks to how simple it is to control.

Played from a third-person (third-bird?) perspective from behind your feathery avatar, you swoop, ascend and turn using just the one control stick. If a change of speed is what you're after, the triggers make you glide quicker or slower, which is helpful for making tight turns.

Bird call lovers rejoice because there's also a dedicated button for chirping to sing your song.

An important element of Feather's freeform exploration is that it's impossible to fail. If you do manage to bop your beak into a tree, you'll automatically be gently rewound back to before your collision. My partner amusingly remarked it's nice Feather included the classic Forza Horizon rewind, which is where the gameplay similarities between the two distinctly different games end.

Feather is also incredibly beautiful. The island you fly around features different environments such as lush forests and frosty mountain peaks, each rendered in lovely colour palettes and react to the weather around them.

Seeing the colours change dynamically during the day-night cycle from the warm hues of the sun to the deep blue of evening is such a nice touch.

Although Feather forgoes traditional game objectives, you are rewarded for exploring every little detail of the island setting. Various mysteriously glowing archways are scattered around, inviting you to fly through. Circular archways change the background music, while triangular archways transform you into different types of birds — magpies, seagulls and cockatoos are among the selections.

Special mention needs to go to Mitchell Pasmans who composed Feather's richly meditative soundtrack filled with many gorgeously arranged pianos, strings and synths. It's the perfect accompaniment for such a relaxed game that transforms your flight into a journey towards zen.

When I sat down to play Feather, I was stressed, tired and grumpy, but everything about the game melted my negative emotions away. The freeness of taking to the skies and observing the pretty environments around me was such a soothing act. Then another feather in Feather's cap appeared — I saw what looked like another bird flying in the distance.

I had forgotten that Feather integrates seamless online multiplayer, connecting you to anyone else playing across any platform. What I saw wasn't an AI-controlled character or a fatigue-induced mirage. Someone else's bird was gracefully flying around the island. Caught completely by surprise, I smiled as I caught up to my new avian friend, who proceeded to excitedly chirp at me. We chirped back and forth as we circled the island together, totally anonymous, but completely connected through our shared moment.

The sheer spontaneity of the moment heightened its impact as I giggled throughout our peaceful flight of the serene surrounds. Eventually, we parted ways, only for me to befriend someone else playing as a seagull. Alas, there were no hot chips for us to steal, but we enjoyed flapping at one another nonetheless. Once our time together was over, I transformed once more and flew into the night, completely content.

Thanks to the new Explorer Update, there's more to explore in Feather, with a secret new — equally beautiful — area to discover.

It's absolutely worth checking out and further proof that games don't need to challenge you to be worthwhile.

Feather is out now for PlayStation 4, Xbox One, Nintendo Switch and Steam. The Explorer Update is live on all platforms except Switch, which will be updated soon. A game code was provided by Samurai Punk. 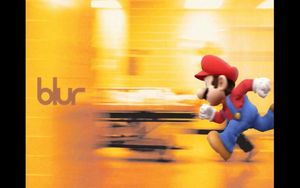 
Blur's Song 2 but Mario does all the 'woohoo' work? Yes!