While I'm largely against the corporatisation of Pride, I still love the Apple Watch Pride band because it's more than an empty gesture.

I don’t normally go in for Pride products, but there’s one exception I make every year: the Pride Apple Watch Band. I’m a sucker for a good Watch band, and one that allows me to literally show my Pride on my sleeve is a nice added bonus.

Plus, this year’s freshly announced band has special extra meaning in a year when Transgender rights are under such intense attack.

The reason why I don’t normally go for Pride products is because I hate the corporatisation of queer pride. For one month a year corporate America (and, to a lesser extent, Australia) remembers it can make money off us and slaps a rainbow on something to make some pink dollars. Of course, most corporations only started doing that once it was fashionable, and usually only support the more attractive and stereotypically glamorous parts of the rainbow. Then they go back to shovelling money into the Republicans and Liberals to silence us.

However, there are some exceptions, particularly when the product is mindfully designed by queer people, the company in question isn’t trying to profit off a protest event, and the company doesn’t secretly discriminate against queer workers while wearing an Ally cape.

Instead of just doing the usual rainbow flag, this year Apple has woven in the colours of the trans pride flag and black and brown to represent the Black and Latinx communities, as well as those who died from or are living with HIV/AIDS.

Apple CEO Tim Cook released a comment about the importance of the frequently forgotten members of our community: “Even before the events at the Stonewall Inn brought the LGBTQ+ movement to new prominence, Black, Brown, and transgender activists were key leaders in the march toward equality. On many fronts, Apple supports the ongoing and unfinished work of equality for diverse and intersectional communities, and we want to provide every opportunity to celebrate and honour this history during Pride season.”

The outcome is a really nice looking woven solo loop watch band made out of recycled yarn. I find the woven solo loop bands really comfortable, and more breathable than the silicone band from last year. I also love the symbolism of having all these colours of the flags woven together, because we are one community despite those who would seek to divide us.

While it’s easy to dismiss the sentiment expressed here as empty words to back up the sale of a $139 watch band, Apple has put their money where their mouth is, making sizable donations to charities and groups who are doing the work up front, rather than some kind of “portions of the proceeds will be donated to charity” gesture that isn’t always followed up on later.

This year’s US charities are Encircle, Equality North Carolina, Equality Texas, Gender Spectrum, GLSEN, Human Rights Campaign, PFLAG National, the National Center for Transgender Equality, SMYAL, and The Trevor Project in the US, as well as ILGA World internationally. They mentioned these groups in the watch band press release, but they also contribute to Mardi Gras and other Australian organisations without crowing about it in a press release. This article from last year tells the broader story about Apple’s commitment to equality.

Granted, as a trillion-dollar company, Apple could afford to end climate change, poverty or homelessness if its shareholders so chose. But these sizeable donations allow the organisations to continue their work, and it’s better than the nothing many other companies with pride products do.

Transgender rights are under attack, particularly in America with well over 100 anti-trans bills making their way through legislature this year. So, it’s extra important that big companies with loud voices and deep pockets like Apple make it clear they’re standing with not just the trendy, hairless, campy, gay men, but also the less easily marketable letters of the LGBTQA+ spectrum.

As well as the Watch band, there’s also two new watch faces coming in a free software update to match. It’s available to pre-order now, shipping from May 25. 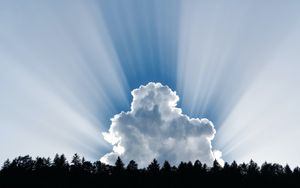